During lockdown, some of the best online theatre has been shows that are specially created for this digital format. Much better than dull records of dramas that might have worked well on stage, but now seem sadly moribund and exceedingly slow on the laptop screen. So it’s good to welcome Midnight Your Time, which is remotely directed for streaming by Michael Longhurst, much lauded artistic director of the Donmar Warehouse, after being reconceived by award-winning playwright Adam Brace, who wrote the original version of this one-woman show about a decade ago. Best of all, it features actor Diana Quick giving a bravura performance.

The set up of the story, which was first staged by HighTide Theatre with Quick in 2011 at the Assembly Rooms in Edinburgh, is familiar and simple. Every Thursday, Judy, an unwillingly retired lawyer who is interested in human rights and progressive politics, tries to contact her daughter Helen online. Judy lives in Islington, her daughter is in Hebron, Palestine, working for an NGO. The problem is that Helen never answers her mother’s calls, so Judy has no choice but to leave various video messages – and she keeps going for some 13 weeks. During this time, the tone of her messages varies from artificially cheery to blatantly tipsy to pretty furious. As she knowingly notes, “I know it’s not the first one-way conversation we’ve ever had.”

Brace examines this fraught mother-daughter relationship, a classic case of a contemporary generation gap, with enormous sympathy. He never judges either party, showing instead how Judy’s possessiveness and desire to make important life decisions for Helen has the effect of alienating her child. At first, it seems strange that Helen has chosen to work in one of the worst trouble spots in the world rather than, as Judy repeatedly argues, using her skills for political betterment closer to home. But gradually we come to understand that spending five years in Palestine is vastly preferable, in her eyes, to enduring five minutes in the company of Mum. And we can’t blame her. 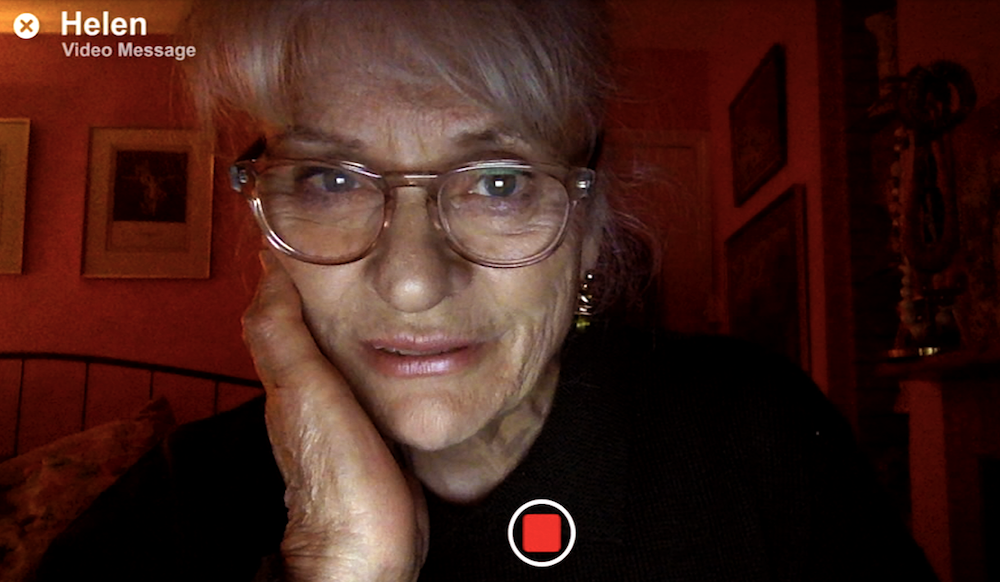 While most of the writing is hyper-realistic, being nuanced, subtle and aching with subtext, Brace also satirizes the social mores of the north London progressive middle classes. Judy clearly has a difficult relationship with alcohol, and when she says that she was “squeezed out” of her job as a lawyer, it is not hard to imagine that she has not been the most generous of work colleagues. She never comes across as a team player. In fact, her brand of lefty individualism – which involves competing with neighbourhood friends to host a dinner for an Afghan refugee or helping a corner shop family fight their landlord – becomes more and more grating. Yet, at the same time, it’s easy to feel her pain. She is aging, lonely and frustrated.

Longhurst and Quick brilliantly revisit the play that they first premiered in 2011, at which time she sat at a computer on stage with her face projected onto a big screen, and now the whole team revels in the resonances of the piece during this time of lockdown. Quick records her video messages with all the passionate intensity of a controlling tyrant, varying her shiny-eyed look and tone from commanding patronage, with dark hints of disinheriting her daughter, to querulous drunkenness and genuine heartbreaking upset (pictured above). When she does manage to talk to Helen she looks transformed, bright and bubbly. In each of the dozen or so scenes she looks and feels in a very different emotional register, which is cumulatively both exasperating and eventually moving. Yes, quietly moving.

At just over 30 minutes, the monologue never outstays its welcome. And it’s an ideal play for online streaming. Most viewers will be struck not only by the intimacy and emotional truth of the performance, but also by the writing’s resonance: “Drop us a line and stay safe,” says Judy, and it’s clearly a cry from the heart of anyone who is currently shielding. Brace artfully includes such material among the passages about the way mother and daughter had a blazing row at Christmas, the jokes about “Five Go Wild in Palestine” or the satirical picture of a Global Women’s Peace network. Midnight Your Time is the Donmar’s first online premiere – and I really hope it won’t be its last.