A Covington police officer recently started to follow and pull over a driver who appeared to be impaired – but then the cruiser’s lights and siren malfunctioned.

“We had to disengage,” Police Chief Rob Nader said. “The guy quickly disappeared into another jurisdiction.”

“That’s the problem with an aging fleet,” Nader said. “Reliability is a challenge.” 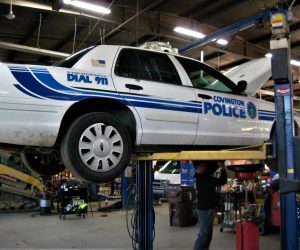 This week, the Covington Board of Commissioners took another step toward addressing that “challenge,” voting 5-0 to amend the City’s budget mid-year to set aside $500,000 to buy 10 new cruisers. The money is coming from the 2021-22 unassigned fund balance.

The proposal was set in motion by Mayor Pro Tem Ron Washington at the Jan. 4 meeting after he rode with a police officer for a night. “Our Police fleet is in somewhat disrepair … I think that needs to be addressed,” Washington, a former police officer himself, told his colleagues.

Soon, the Commission will vote on a contract to buy 10 Ford SUV Interceptors and another contract to “upfit” them with police equipment, including lights, sirens, and cages. Barring complications, it’ll take about eight months for the vehicles to be delivered and an additional month for the upfitting, said Steve Hedger, supervisor of the Fleet Management Division in Public Works.

But the net gain to the Police Department will not be 10 vehicles. As of now, Hedger said, the plan is to retire six vehicles that are long past their useful life.

Nader praised the Commission for its decision, saying the City’s current leaders have made a conscious and aggressive effort in the last few years to begin “catching up” after years of what many considered neglect. After buying 29 cars in 2020, the Police Department currently has 11 other vehicles on order.

“It shows their commitment,” Nader said.

To fully understand the issue, one has to know a bit about Covington’s spending history and the nuances of police work and engine wear.

During the first half of his 25-year career, Nader said Covington bought an average of 10 cars a year, which more or less kept the fleet up to date for the City’s force of 114 sworn officers, given the life industry-average life expectancy of 7 to 10 years for a patrol car.

To make a point about the police fleet’s age, Nader often joked that he was going to apply for official Historic Motor Vehicle license plates from the Commonwealth of Kentucky to put on his vehicles. But the humor was often overshadowed by the reality of frequent breakdowns that forced him to drastic measures.

Recently, Nader told the Commission that one “Band-Aid” he employed to make sure his officers had enough vehicles to patrol was to buy “retired” vehicles from other agencies. These are cars, in other words, that were deemed by those agencies to be no longer useful.

In the past year, that included three cruisers from Erlanger, two from Independence, and four from the Kenton County Sheriff’s Office.

“Believe it or not, it’s in better shape than some of our cars,” Nader told Commissioners.

Older than they look

By its very nature, a night of patrolling includes frequent starting and stopping, quick acceleration, and a huge amount of idling as officers pull over to watch a building or intersection, communicate with each other, and call in reports. The engines of cars that are shared between patrol shifts might be running 10 to 20 hours a day, Nader said.

“It’s the idling time that wears down the engine and components quicker than a normal family car,” Nader said.

And, Hedger pointed out, those hours add up.

As those miles build up, so do the repairs, the cost, and the days those cars are in the shop.

For the mechanics in Hedger’s division, a newer car typically needs things like fluid changes, new tires, and brakes. But older cars routinely require things like water pumps and front-end rebuilds, not to mention engine work.

According to Hedger’s records, when you add expenses related to maintenance, repair, and fuel, the cost per mile of operating a 2013 marked police car was 86 cents, versus 30 cents for a 2021 vehicle. For a cruiser that’s driven 12,500 miles a year – the average in Covington – that’s an additional $7,000 a year.

“And an older car not only costs more but also has twice the down time,” he said.

When the 2022 vehicles arrive, he hopes his officers see the last of some of those cars.