Ask half a dozen seafood wholesalers in the US about their price for a pound of pasteurized jumbo lump blue swimming crab from Indonesia and you’ll get half a dozen different answers within a $6 range, anywhere from as low as $27 to as high as $33.

That’s what Undercurrent News found this month when it checked in on one of the most stressed markets in the seafood industry, where prices have barely dipped from record highs for more than 18 months but dealers are afraid to buy more and get stuck with lots of inventory when the ultimate price drop happens.

That’s because wholesalers have been burned before, said Alex Cook, senior VP of sales for seafood importer Bonamar, in Miami, Florida.

“Historically you would have an all-time high season, like we had this last year and a half, followed by a crushing crash,” said Cook. “We haven’t seen that this time around. It’s been two solid, back-to-back years, which kind of breaks all kinds of history. I’m not sure with demand and supply situations globally that a crash is necessarily going to occur, but I do think there will be market corrections and they could be fairly sharp.”

Another major crab importer, who requested anonymity, further explained the situation, saying producers in Indonesia and other countries have continued to ask for higher prices at the docks, arguing that the supply is tight and in demand, but the US market has become weathered by the high prices and has started to push back. He also believes lower prices will prevail, but adds a caveat. 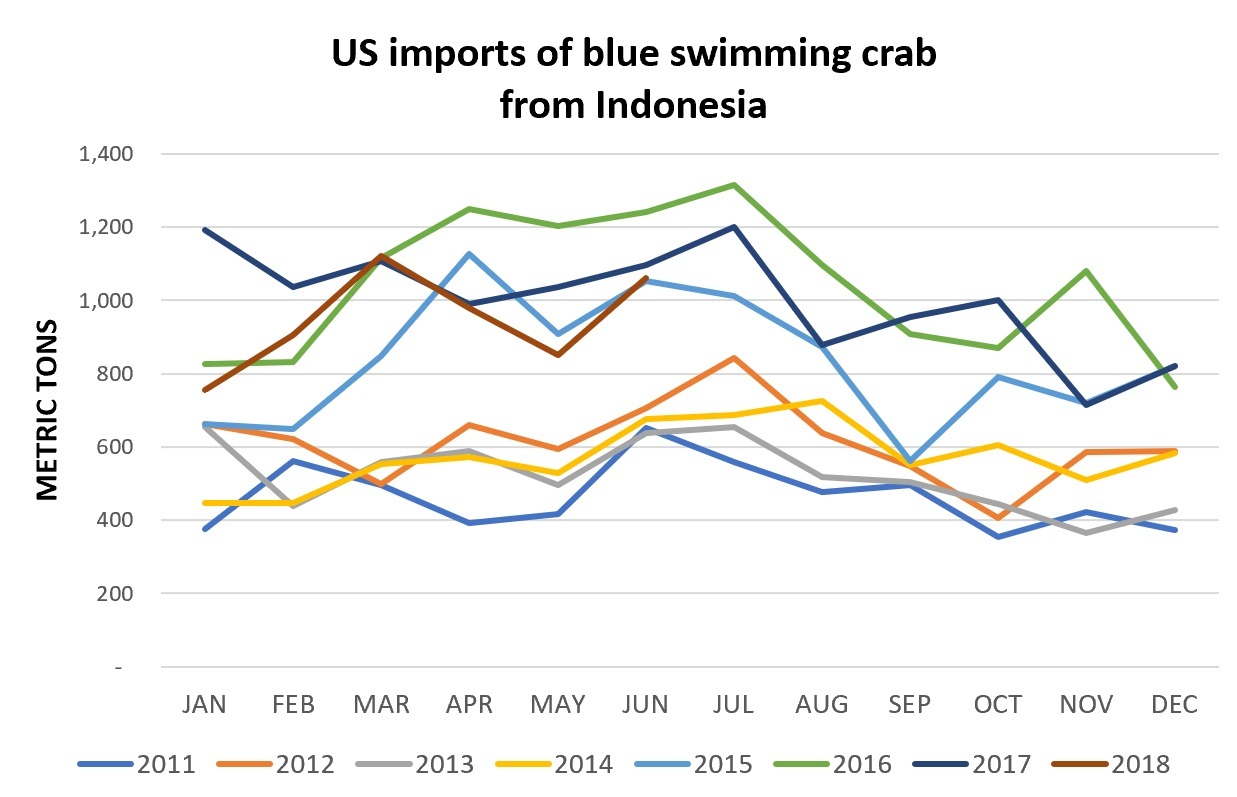 Overall, imports up by 4%

Claims by Indonesian blue swimming crab harvesters that supply is tightening seems to be born out by Undercurrent’s quick review of the import data maintained by the National Oceanic and Atmospheric Administration.

Indonesia represented 44.6% of the combined 12,736t of blue, blue swimming and red swimming crabmeat imported by the US during the first six months of 2018, far more than any other country. The second largest source of crabmeat was China, which sent the US 1,880t, or 15% of all crabmeat.

It is not yet known how much crabmeat was imported by the US in July, and that could make a difference. July is consistently the biggest month of the year for Indonesian crabmeat coming to the US, and it’s almost always followed by a decline in volume from that country. 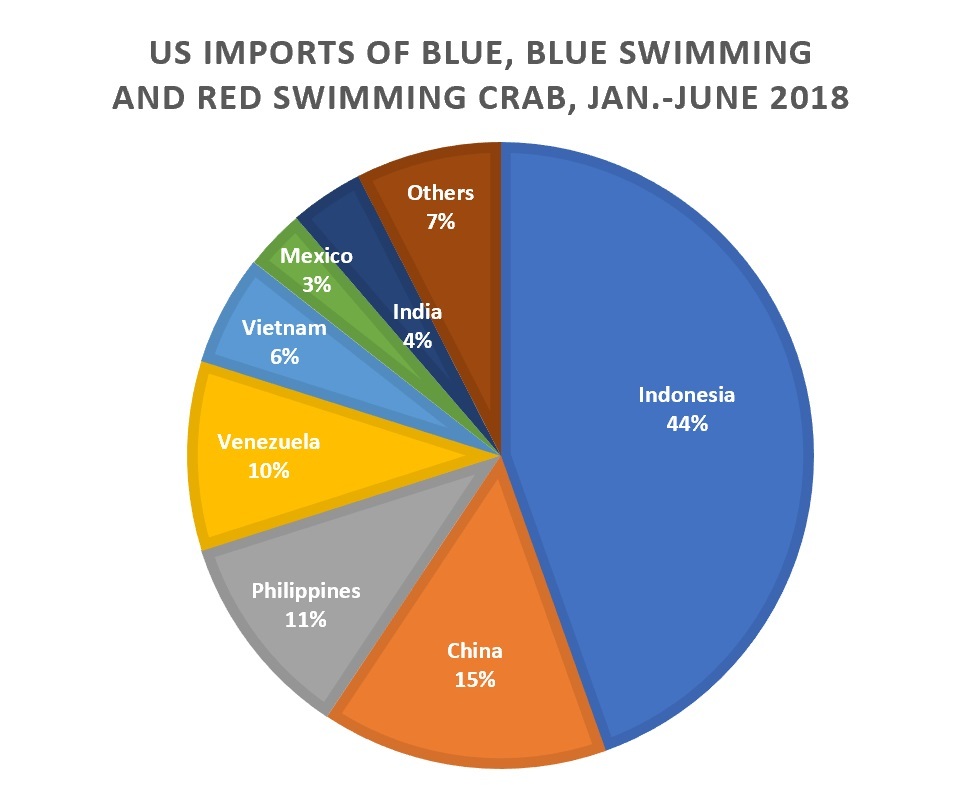 Florida to the rescue

One thing that could help to push prices down in the near future is that orders made now will not arrive until September at the earliest, typically after demand slows down in the Mid-Atlantic US, the biggest market for crabmeat in the country.

But Brendan Sweeny, VP of operations for Handy Seafood, a processor based in Salisbury, Maryland, knows the industry well and thinks demand won’t fall off that much. When the Mid-Atlantic slows down, he said, sales efforts will begin to focus more on Florida and other southern states.

“There isn’t a clear signal,” Sweeny told Undercurrent of the unknowns facing the industry. “No one is really overloaded on inventory, but everyone is trying to keep their inventory moving. So, everyone is being a little proactive in that respect.”

To deal with the high prices, restaurants are still buying less expensive variations of crab, such as lump and claw.

Prices didn’t drop last year after the summer was over. To the contrary, they went up and stayed until the early winter.

Other factors that could help to bolster supply is the return soon of Chinese red swimming crab (Portunus haanii) from a months-long moratorium. But it’s unknown how strong the fishery will come back after being worked pretty hard during its previous season, sources told Undercurrent.

Recall that the return of China’s red swimming crab from its 3.5-month moratorium in 2017 led to a big surge of imports in October that ultimately helped to push prices down.

Also, importers of red swimming crab face the looming impact of the additional tariffs US president Donald Trump announced July 10 on $200 billion worth of imported Chinese goods. The list included numerous methods of preparing or packaging crab from China. The tariff was proposed to be 10%, but US trade representative Robert Lighthizer on Wednesday confirmed that he’s been ordered to investigate raising the amount to 25%.

“The increase in the possible rate of the additional duty is intended to provide the administration with additional options to encourage China to change its harmful policies and behavior and adopt policies that will lead to fairer markets and prosperity for all of our citizens,” Lighthizer said in a statement released by his office.

A final decision on the tariffs is not expected before September, following a hearing in late August.

Also, an increasing amount of red swimming crab is being consumed at the source, in China, meaning less for the US, Bonamar’s Cook noted.

Like blue swimming crab, the price of red swimming crab has been at an all-time high, selling for $18 to $20 per pound, according to wholesalers, though more than a few said they had none left in inventory.

“You can make up your own price on red swimming crab if you have any of it left,” snapped one wholesaler who had none in his inventory. 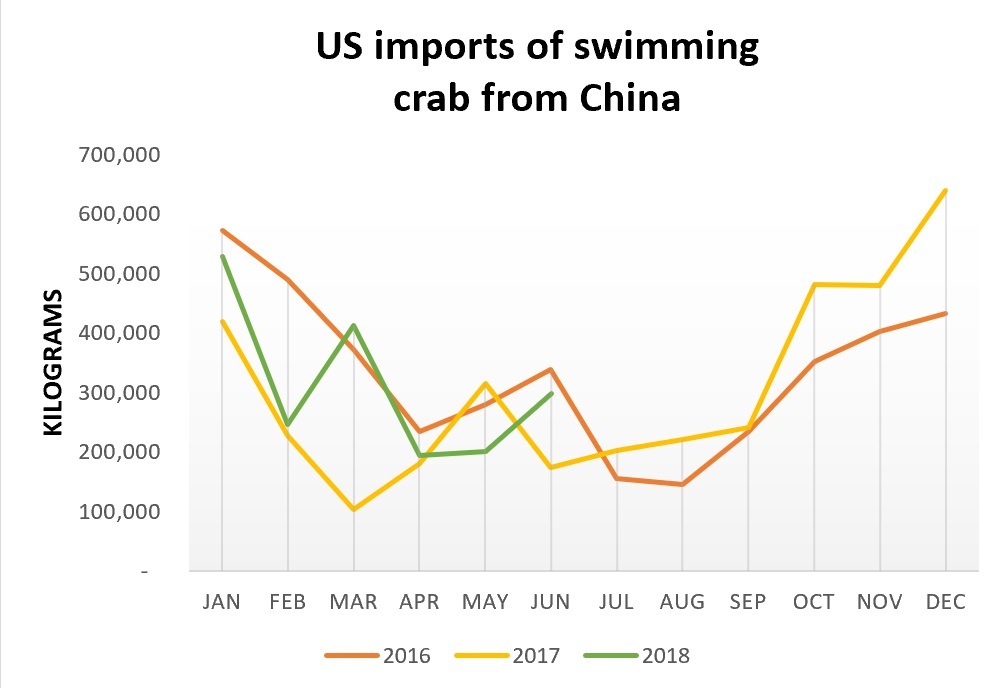 But count Luis Vera, VP of the shellfish division for Seafarers, as among the crab importers and wholesalers who think crab prices are staying high for the foreseeable future. The seasoned 16 year crab professional points to Venezuela’s coming two-month moratorium, which starts on August 15, as a significant factor.

Venezuela sent the US 331t of its nonpasteurized Atlantic blue crab in June. it was the country’s biggest month since at last 2011 and 92% more than the 172t it sent to the US in June 2017, NOAA’s data reveals. It was the US’ second largest source of crabmeat during the period, behind only Indonesia.

During the first six months of 2018, Venezuela accounted for 1,247t of crab imported by the US, 10% of all crab imports by the country.

The import of Venezuelan crab preceded the announcement of an outbreak of Vibrio parahaemolyticus linked to the product, which caused the Centers for Disease Control and Prevention (CDC), on July 13, to recommend against buying it. The CDC, as of Friday, had yet to lift its advisory, though several crab importers have turned to using high pressure processing to kill the pathogen and have resumed making Venezuelan blue crab available. 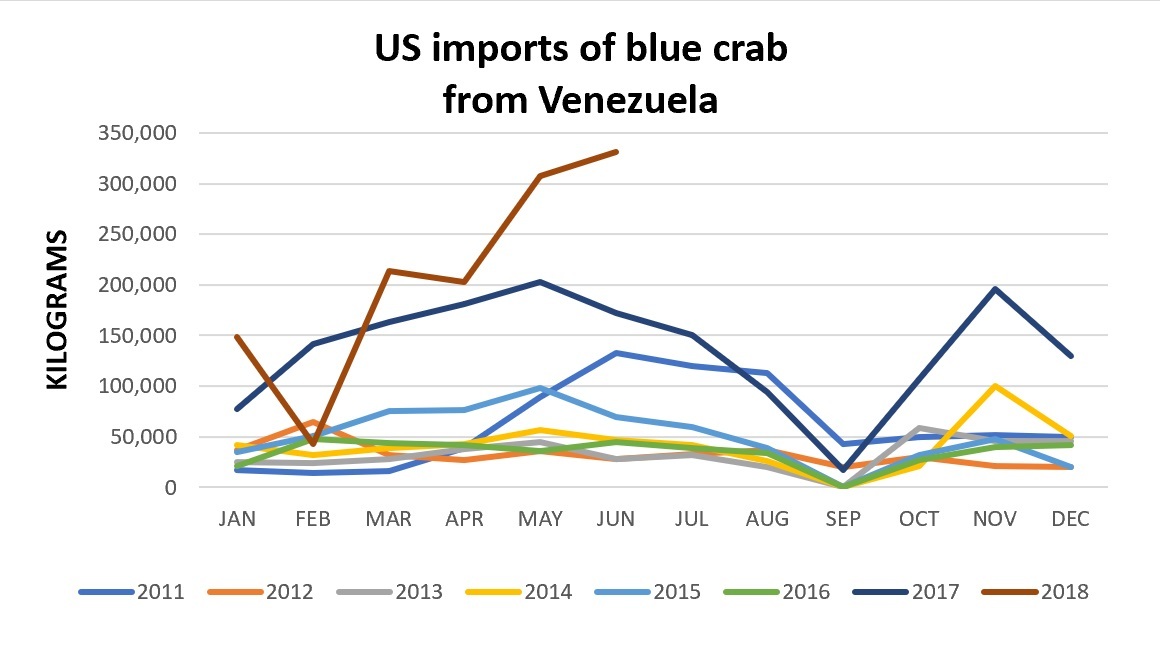