The long-awaited Woodfin Greenway/Blueway and Whitewater Wave, in the planning stages for more than a decade, has taken another upstream leap with the release of a master plan and the purchase of a land from Waste Pro, to be added to Woodfin Riverside Park and the eventual greenway and “blueway,” or river corridor.

RiverLink, the Asheville-based river advocacy nonprofit and land trust, announced the developments in partnership with the town of Woodfin, Buncombe County and the Buncombe County Tourism Development Authority.

The Riverside Park Improvements & Expansion Master Plan was released in early July, a conceptual design prepared by Equinox Environmental and S2O Design & Engineering, capturing the vision for the expansion of Woodfin Riverside Park, which includes what is expected to be a world-class Whitewater Wave feature sure to draw local and regional river paddlers.

Public comments on the Master Plan are being collected now with a survey on riverlink.org. 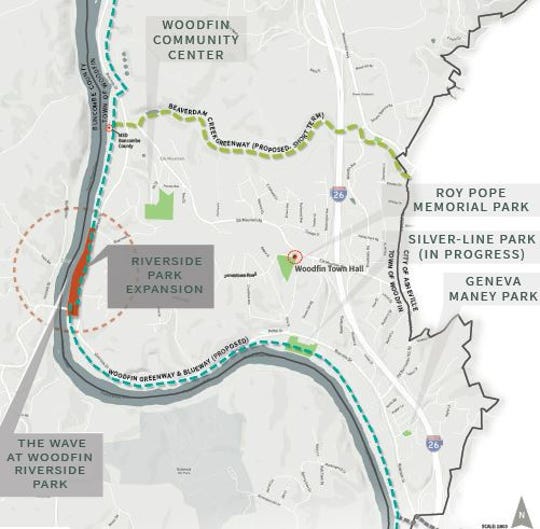 Map from the Riverside Park Improvements & Expansion shows where land purchased by Woodfin from Waste Pro will be added to the park. (Photo: Courtesy of RiverLink)

Woodfin, a town of some 8,000 residents just north of Asheville, will consider including a variety of amenities in the park plan such as a grand entry plaza with a pavilion overlooking the Wave, a viewing amphitheater, a play slope, beach access near the Wave, an ADA-accessible fishing dock, a pump track and more.

“This project is vital to the ongoing enhancement of the French Broad River throughout Buncombe County, and our partnership with the Town of Woodfin and Buncombe County represents an important collaboration.”

The Greenway and Blueway will significantly increase recreational opportunities along the French Broad River in response to a growing demand in the region for water recreation facilities, according to the master plan, with a population growing by around 25% every 10 years for the last 20 years.

According to the plan, there are an estimated 100,000 river users a year through the Asheville River Arts District. The Woodfin Greenway/Blueway and Wave would help to alleviate that congestion. 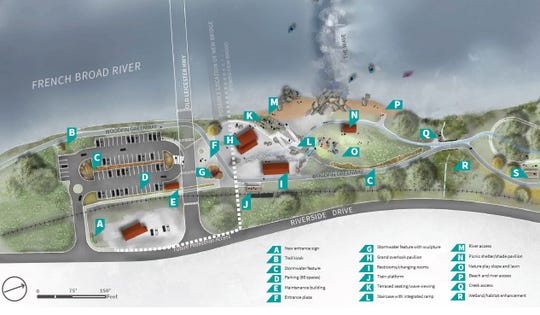 This rendering in the Riverside Park Improvements & Expansion Master Plan, show the plans for park amenities, including the Whitwater Wave. (Photo: Courtesy of RiverLink)

The multidimensional project is aimed at creating more outdoor spaces for locals and tourists to play, a jolt to the Woodfin and Buncombe County economy, and environmental protections like flood mitigation, wildlife habitat protection with the following:

“The town is so happy to see this major project begin to take shape. The vision is becoming reality, thanks to the support of Woodfin’s voters, the generosity of our funding partners, and the partnership with RiverLink and Buncombe County,” said Woodfin Mayor Jerry Vehaun. 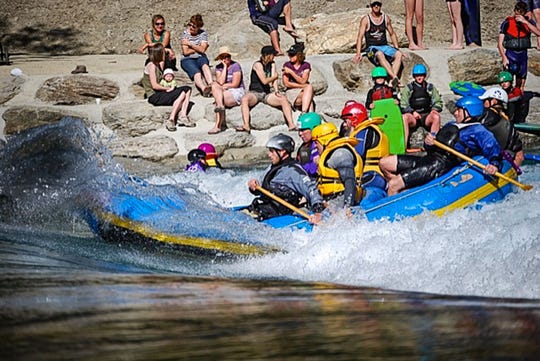 The future Woodfin Whitewater Wave will look similar to this artificial wave at Camp Hill Surf Park on the Hawea River in Waneka, New Zealand. It is designed by Scott Shipley, who is designing the French Broad River wave. (Photo: Courtesy of S2O Design and Engineering)

But Vehaun, mayor since 2003, said the project updates are tempered by the death of Jason Young, 48, who was the Woodfin town administrator since 2002. He died March 10 after battling cancer for years.

Young is survived by his wife of 23 years, Johanna Huggins Young, his son, Kennedy, and daughter, Autumn.

He graduated from UNC Asheville with dual majors in history and political science and the University of South Carolina-Charleston with a master of public administration. According to his obituary, Young’s passions were politics, history, the town of Woodfin, and his family.

“Indeed, a noble person, he lived to make the world a better place,” his obituary reads.

Young is remembered for his relentless passion for not only the Greenway/Blueway Project and Whitewater Wave, but as a tireless proponent of his adopted home of Woodfin, those who knew him well say.

“(His death) left a big hole in the town. He was working close to the end. Woodfin was his baby. He was there from before this idea developed and then it sprouted,” Vehaun said of Young. “He was so good to work with. Probably his biggest legacy was the greenway and the wave.”

“Jason was an excellent town manager and wonderful neighbor, and I was saddened by his passing. He cared deeply about the Woodfin community and the Greenway/Blueway project and wanted nothing more than to see this project through to completion,” said Coral Darby, founder of Darby Communications and a member of the Woodfin Concerned Citizens Group.

But she said she believes Young’s groundwork will live to see fruition.

“There’s good reason to be optimistic as Woodfin has improved their transparency around the project details and just recently hit a major milestone with the purchase of the Waste Pro site,” Darby said.

Eric Hardy, the former performance manager for Buncombe County and assistant director of finance for the city of Asheville, took over as Woodfin town administrator July 1.

There are an estimated 10 commercial outdoor outfitters that operate on the French Broad River in Asheville, some which are looking to expand to Woodfin, according to the plan.

“With the finalization of the greenway, locals will have the opportunity to shuttle themselves back upstream after a float via bike on a separate, safe, greenway removed from a very busy road,” said Brennan Splain, co-owner of French Broad Outfitters.

“Businesses along the corridor can expect increased visitation without having to add parking spaces,” he said.

Jim Oliver, owner and founder of AvL Technologies, based in Woodfin, said in a statement that he is “very excited about the acquisition of the Waste Pro property and what this will mean for the expanded Riverside Park and the Whitewater Wave. We appreciate the Woodfin Commissioners and everyone involved in helping to make this acquisition possible.”

While there have been some funding setbacks for the $18 million project, it continues to move forward, Vehaun said. 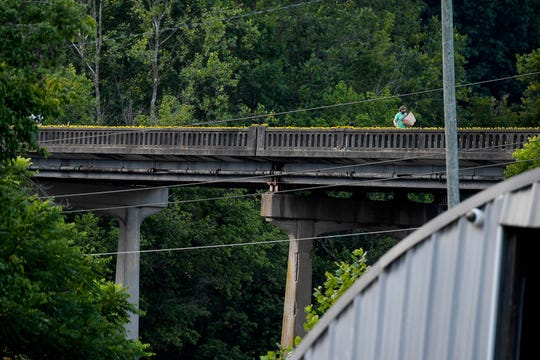 Residents of the Olivette community picked sunflowers to spread cheer across the Craggy Bridge in Woodfin August 19, 2020. The Town of Woodfin recently purchased 4.5 acres near the Craggy Bridge to include in its Riverside Park Expansion, which will include athe Whitewater Wave. (Photo: Angela Wilhelm/[email protected])

The purchase of the 4.5-acre Waste Pro site, located near the Old Leicester Highway bridge along the French Broad River, is considered a huge leap in the project. This former storage site for industrial recycle bins, which is about 70% paved in concrete, will be completely transformed and ultimately incorporated into the master plan for the Riverside Park expansion.

Nearly $13.5 million in funding has been identified to complete the 5 miles of greenway, the creation of Silver-Line Park, and expansion of Riverside Park to accompany the Whitewater Wave.

Included in this amount was a $4.5 million bond referendum approved by 70% of Woodfin voters in November 2016 and a grant from the county TDA for $2.25 million.

Vehaun said the Waste Pro land was purchased for $600,000 with a combination of these funds.

“Our role is to provide technical assistance, manage the use of grant funding and reporting, and to provide oversight for the construction and design of the greenways along N.C. 251 and Beaverdam Creek,” O’Conner said. 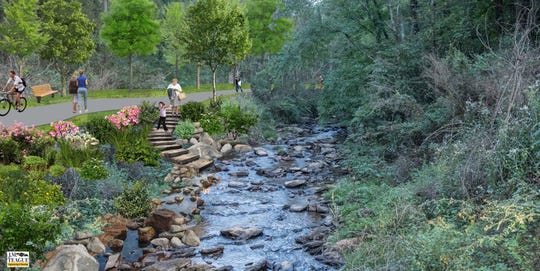 This rendering depicts a portion of the Woodfin Greenway and Blueway project along Beaverdam Creek. The project will also include five miles of new greenway connecting Woodfin to Asheville, new parks and a whitewater wave in the French Broad River. (Photo: Courtesy of Kenny Armstrong)

“The timeline on the greenway has been disrupted at this point due to COVID-related budgetary issues experienced by N.C. DOT. Our funding from the Federal Highway Administration is administered by the N.C. DOT. We have not yet received indication when funding will be resumed thus delaying our efforts to complete the design and begin construction,” he said.

Vehaun said Silver-Line Park construction has not been impeded and got underway this spring, but “it could be six months before the NC DOT releases any money, and construction costs will continue to rise” for the Riverside Park expansion.

He said it might be next spring before work gets started to clean up the former Waste Pro site and to start construction on Riverside Park.

Karen Chávez is an award-winning outdoors and environment reporter for the Asheville Citizen Times and USA TODAY Network. She is the author of “Best Hikes with Dogs: North Carolina,” and is a former National Park Service ranger.