Ask the Expert: What’s the Best Way to Account for Inventory?

Toyota has a unique cultural language. It’s called 8-Step Problem Solving. It’s the “patois” of the Toyota Production System (TPS). The patois is the dialect of the common people of a region, differing in various respects from the standard language of the rest of the country.

8-Step Problem Solving is the dialect of the TPS, it and differs from that of other corporate cultures. It is the standard way problems are addressed and discussed in work groups and between departments. This problem-solving is expressed in writing using Toyota’s A3 reporting system.

I remember taking the problem-solving class at the training center well before the first car rolled off the assembly line. Toyota instilled this thinking in all of us.

Shared attitudes, values, goals and practices make up the culture of an organization. There’s a lot of talk online about how to form a lean culture and how important culture is to a lean implementation. We’re told that leaders should exhibit certain behaviors in order to be lean leaders, and, absent these behaviors, the lean effort is likely to fail.

My friend Dr. Bob Emiliani cites many of these desirable behaviors in a 2014 article, (as well as a list of behavioral wastes—Dr. Bob calls them “fat” behaviors). The patois of the Toyota Production System directly addresses many of the behaviors on both lists. Desirable behaviors like honesty, consistency, objectivity and others are demonstrated in the patois, as well as addressing behavioral waste like autocratic tendencies, disrespectfulness, and bullying.

Looking back, teaching and requiring everyone to address problems with the common language of 8-Step Problem Solving was a major key to the forming of the Toyota culture. One of the major benefits of having this standard method was that opinions and rank fade away. When a well-done, logical, fact-based A3 is developed, the results speak for themselves, no matter company rank. It speaks to a team leader in the same way it speaks to a general manager.

Many of you have heard of Toyota’s famed Quality Circles. This is the template that these Quality Circles use to work on problems, and the A3 is the reporting method.

The 8-Step Problem Solving is also the method used for kaizen (continuous improvement). Not that I did an A3 for every kaizen. It would be impossible in the fast-paced environment of a Toyota plant. (At Toyota, the A3 is typically used for big problems or repeat problems.) But the thinking pattern became front-and-center for all leaders at Toyota. It’s the way problems are viewed and communicated.

So, what is this 8-Step Problem Solving patois? Below is a typical Toyota-style A3. Let’s run through it step by step. First, let’s give the problem a theme. This is what it’s about. 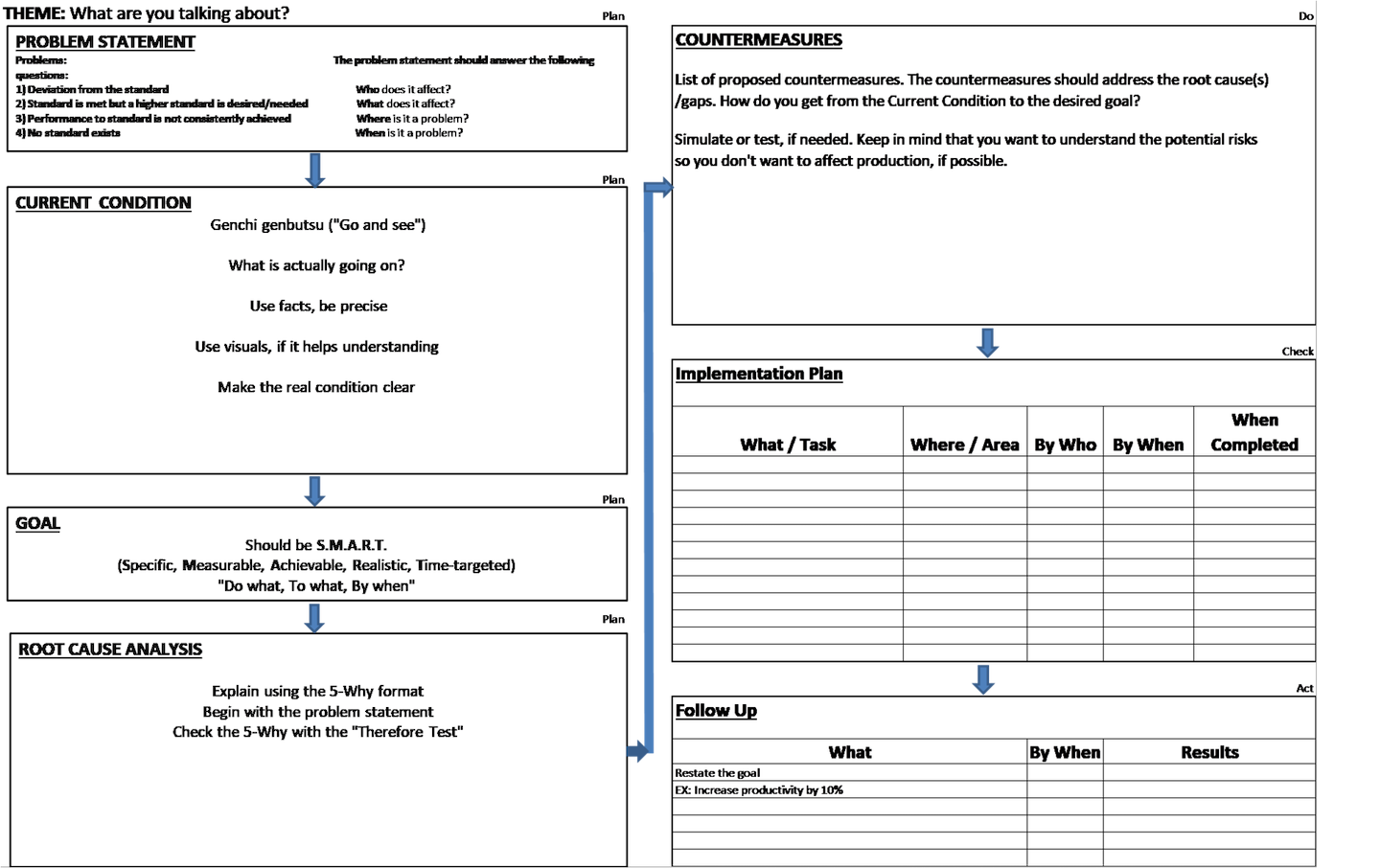 The first step in the problem-solving process is to develop the Problem Statement. This defines the scope by narrowing the focus. What is a problem? There are 4 ways to identify problems.

1. Deviation from a standard.

3. Achievement of the standard is inconsistent.

1. Who is affected? Customers

3. Where is it a problem? Shipping

4. When is it a problem? Daily

Step 2 In practice, I write these questions down and then answer them. I form the problem statement from the answers. “Daily OTD at shipping is 68% over last 3 months, negatively affecting customers and revenue.” This simple method helps me narrow the scope of my problem-solving efforts.

Step 3 Next, we must understand the current condition. This requires observation at the “gemba” or the “actual place where the work happens.” We gather as much information as possible by asking questions of operators, examining/collecting data, examining information accuracy/flow, and we move upstream, if needed. Spend the necessary time and take plenty of notes. These observations paint a picture of what’s really happening. Taiichi Ohno said, “When a problem arises, if our search for the cause is not thorough, the actions taken can be out of focus.” Gather as much information as possible. In my view, the No. 1 reason for failure is the lack of a deep understanding of the current condition.

Step 4 is to set a S.M.A.R.T. goal. A S.M.A.R.T. goal is Specific, Measurable, Achievable, Realistic, and Time-targeted. I’ve found that an easy way for me to make a goal statement is to think this way: Do what, to what, by when. Something like this: Increase OTD to 85% by 12/1.

Step 5 is called Root Cause Analysis. This is where the well-known 5 Whys are asked. Toyota believes if you ask “why” at least five times, you will arrive at the root cause. If you struggle with the 5 Why,  you’re in good company. About asking why 5 times, Ohno said, “It is difficult to do even though it sounds easy.” I think most people who’ve done it would agree. But how do you know when you’ve gotten to the root cause? We use the “Therefore Test” to check our 5-Why accuracy. You simply start at your last answer followed by therefore, then the next answer going backwards. If it makes sense, you have a well-reasoned 5-Why.

Here’s a simple 5-Why with the “Therefore Test”: 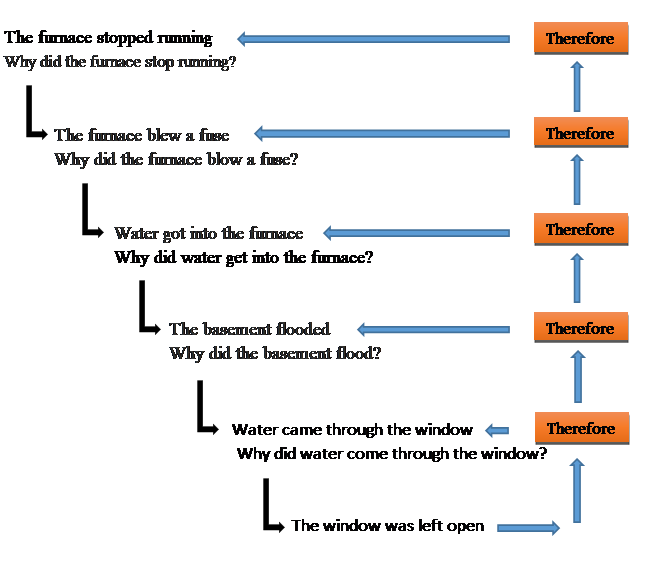 Step 8 is the Follow-Up. Simply copy/paste the Goal Statement putting the due date in the “By When” box. On that date, we check to see if our result is acceptable. If acceptable, we standardize our results. If not, we repeat the problem-solving process until we have an acceptable result.

This is the iterative, logical, rational, and scientific method used by Toyota to countermeasure problems in all aspects of their business. Ohno said, “The TPS has been built on the practice and evolution of this scientific approach.” 8-Step Problem Solving is the patois of the Toyota Production System, and it will work for your business, too.

Phil Ledbetter worked in production leadership at Toyota Motor Manufacturing – Kentucky for 16 years. He’s the author of The Toyota Template, The Plan for Just-In-Time and Culture Change Beyond Lean Tools. Phil is the principal consultant at The Toyota Template. .